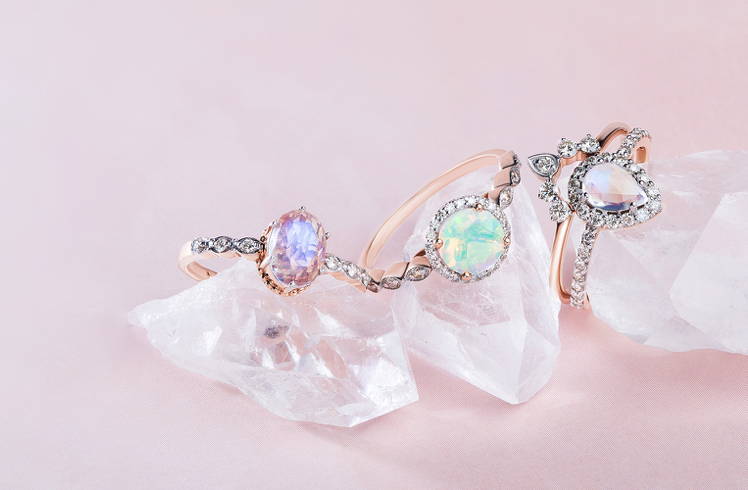 The story of the diamond, the April gemstone, is as rich and multifaceted as the stone itself.

Our modern perception of diamonds is inextricably linked with pop culture and advertising. We’ve all grown up with icons like Marilyn Monroe reminding us that “diamonds are a girl’s best friend,” and marketing slogans like “a diamond is forever” encouraging young couples to tie the knot with a timeless symbol of love. Diamond birthstones predate the world of cinema, TV, and glossy magazines. So how did the ancients value and perceive the April birthstone?

The Meaning of Diamonds: Legends, Myths, and Mughals

Diamonds were first collected in the rivers of India. And though ancient cultures hadn’t yet discovered the prismatic brilliance revealed by faceting diamonds, they revered the sparkling gemstones for their strength and metaphysical power.

The word diamond traces its roots back to the ancient Greek - Adamant or adamas – a term meaning unbreakable, invincible, or unconquerable. As legend has it, Eros (aka Cupid) fashioned his swoon inducing arrow tips out of diamonds. And with a weapon made of adamant (diamond), Perseus finally brought down Medusa. Diamonds are a stone of duality - of love and war. And today, the April birthstone is still the benchmark for indestructibility.

“the evil eye shall have no power to harm
him that shall wear the diamond as a charm.”
- anonymous poet, second-century bc -

The April gemstone figures prominently in Asian history, a precious asset moved across trade routes and looted through the various changings of the guard. “Up to the beginning of the eighteenth century, India was the only source of diamonds known,” writes Oliver C. Farrington in his 1903 book Gems and Gem Minerals.

In it, he tells of a famous diamond named Koh-I-Noor, a Farsi phrase meaning mountain of light. First documented in 1304, but likely dating back several generations before, the diamond’s tale reads like an epic. The massive gem was passed between royals of the Mughal dynasty, and ultimately, as many hands as there were wars.

Koh-I-Noor was embedded in the gemstone laden throne of Shah Jahan (of Taj Mahal fame), and later taken with the spoils of war in the 1739 Persian conquest of Delhi. It made its way through present day Afghanistan and Pakistan, and back to India during the Sikh rule - only to be sacked by the British during their colonial occupation. Worn by Queen Victoria and later the Queen Mother, the contentious gem is currently part of the British Crown Jewels.

How Diamond Became the Birthstone for April

The diamond birthstone, and other calendar specific associations have evolved over time. “The custom seems to have sprung up in modern Europe some time during the fifteenth or sixteenth century,” writes Farrington. “Whether it originated in the twelve gems of Aaron’s breastplate, as many believe, or was introduced by astrologers from the Arabians, as others think, it is not yet known.”

Farrington points to an 1870 a poem published by Tiffany & Co as an early guide to the meaning of birthstones. In addition to showcasing the diamond birthstone, it standardizes the one stone - one month concept, and shares the attributes of each.

she who from april dates her years,
diamonds shall wear, lest bitter tears
for vain repentance flow, this stone:
emblem of innocence, is known.
- excerpt from a poem printed in an 1870 tiffany & co pamphlet -

“The custom is a pretty one, and is to be commended, for the stones are imperishable, and the sentiments ascribed to them represent the accumulated traditions of many ages, races, and peoples,” writes Farrington. And though the associations are pretty standardized now, you’ll find several alternative birthstones for each month. Farrington’s take on the variations in the April birthstone have to do with accessibility over time.

“Such differences have doubtless arisen from the desire to introduce gems which were formerly little known or unattainable on account of their cost,” he writes. “Thus the precious opal, now within reach of all, was rare in former times. By some it is now used as the birthstone of the month October, while others retain the beryl.”

“The diamond has been introduced in modern practice in quite a similar way,” he continues. “But now that nearly every one can own a gem of some kind, the possession of ‘birth-stones,’ and the attachment of special sentiments to them, has become common.”

Diamond, the modern birthstone for April and classic engagement ring choice, represents purity, strength, and devotion. It’s linked to the feminine powers of Venus in Vedic astrology, and makes a seriously sweet gift for your favorite Aries. Those born on Saturday or Sunday may be drawn to the diamond birthstone too, as it’s tied to the day you entered the world.

At Moon Magic, we think diamonds look great on just about everyone, no matter when you were born. So stack them up and bring some of that ancient power, resilience, and invincibility to your life with this enduring gemstone.

Want to learn more about gems and birthstone meanings? Check out our guides to moonstone, the June birthstone and opal, the October birthstone.

SHOP APRIL BIRTHSTONE
Are you in the right place?
Please select a store